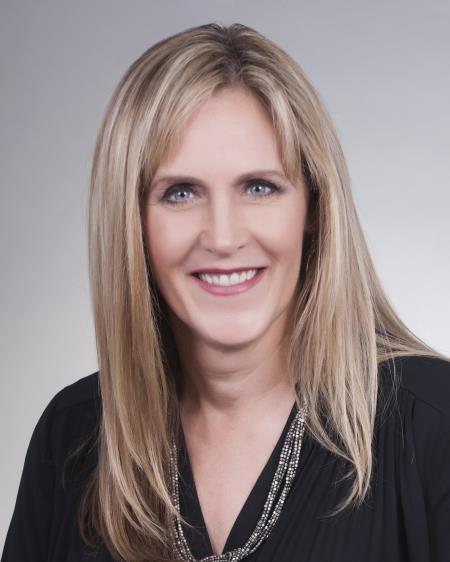 Millennials Are Saving for Home Ownership 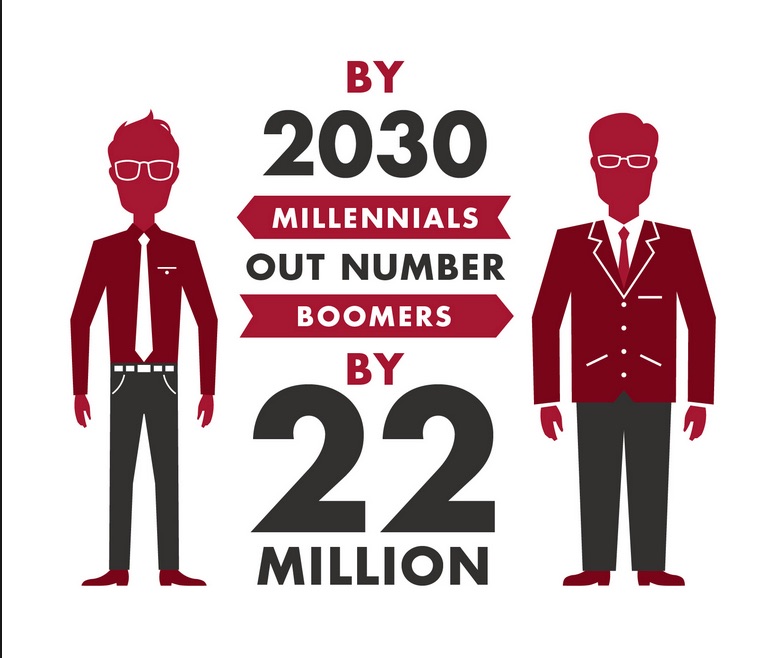 Millennials Are Saving for Home Ownership

Seventy percent of millennials who do not yet own a home expect to become home owners by 2020, and most expect to use the money they have saved for a down payment, according to a survey of 1,270 members of Gen Y aged 19 to 36 conducted by the Urban Land Institute.

The report finds that contrary to popular belief, the majority of millennials are not settling into downtowns of large cities but are living in less centrally located, more affordable neighborhoods. Also, they're "making ends meet with jobs for which many feel overqualified and living with parents or roommates to save money," according to the report. "Still, despite their current lifestyle constraints, most are optimistic about the odds for improving their housing and financial circumstances in the years ahead."

Gen Y consists of nearly 79 million people and is the largest generation in U.S. history, even larger than the Baby Boomers.

The survey found that many millennials are still renting, paying a median rent of $925, with the majority living in city neighborhoods or in the suburbs and only 13 percent living in or near downtowns. Nearly a quarter of those surveyed are still living at home with their parents or other family members.

Millennials say they prefer to live in neighborhoods with urban characteristics, such as those that feature walkability, transportation alternatives, and easy access to shopping and entertainment.

"Gen Yers want to live where it's easy to have fun with friends and family, whether in the suburbs or closer in," says Leanne Lachman, president of Lachman Associates LLC in New York City, who wrote the report. "Their desire for an urban lifestyle suggests that the current trend of urbanizing suburbs will present lucrative opportunities for the development community for decades to come. This is a generation that places a high value on work-life balance and flexibility. They will switch housing and jobs as frequently as necessary to improve their quality of life."

The survey found that 45 percent of Millennial respondents moved at least twice in the past three years – "which reflects the high mobility of the generation," the report notes.

About 26 percent of the millennials surveyed currently own homes, with the majority of those falling between the ages of 31 to 36 years of age. Of those who do own, less than half (46 percent) say they purchased a home because they believe that owning is a good long-term investment; 41 percent said it offers stability; and 40 percent said they wanted more privacy and space. Sixty-two percent say they're very satisfied with home ownership, and 64 percent listed the stability and safety of their neighborhood as the most positive feature of their home’s location, according to the report. 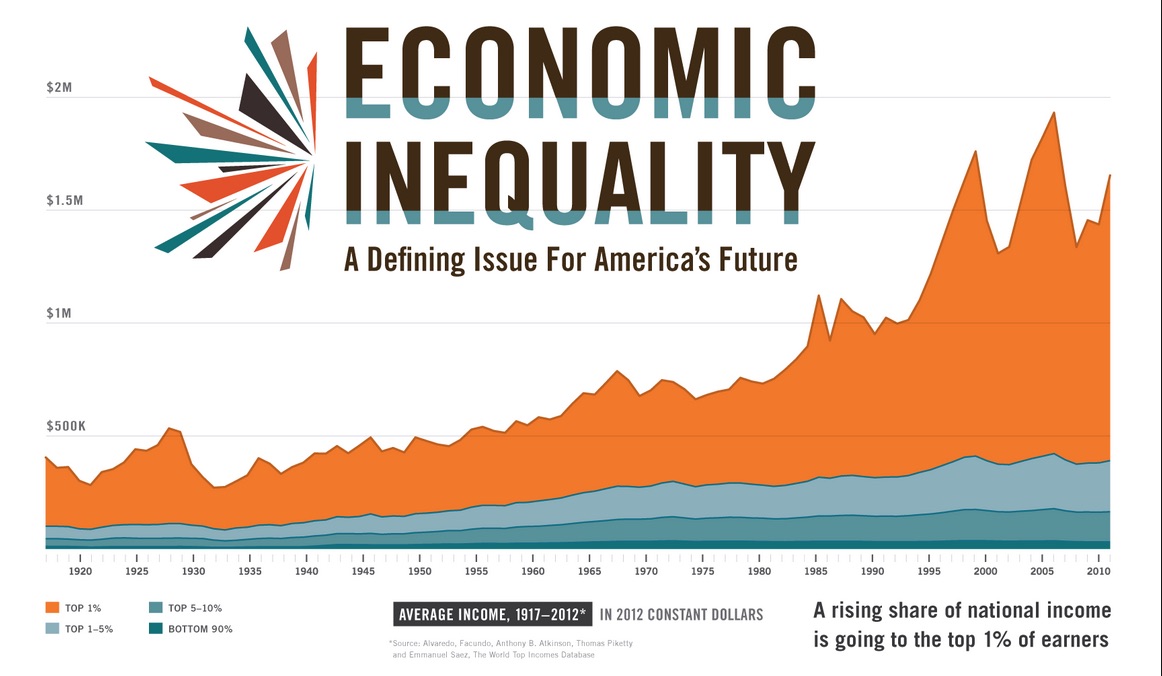 The housing market will be driven by young households and minorities in the years ahead. But until incomes improve across the board and hurdles to credit access are eased, the housing market will continue to perform below capacity, some of the nation's top economists said yesterday at a forum at the National Association of REALTORS®' Washington, D.C., office.

American Nobel Laureate Robert Shiller of Yale University said he sees an anxiety in households today, brought about by changes in technology and rising inequality, that is slowing their march into the market. Shiller said households could be trying to save more because of this "unique uncertainty" in people today.

"There's a general tendency now for people to want to save more, because they're afraid," he said. "They're afraid for their jobs. What do you do? You don't spend money lavishly; you try to accumulate some. But they don't succeed."

Shiller, along with Karl Case of Wellesley College, created the widely tracked S&P/Case-Shiller Home Price Indices in 1991. The forum was hosted by NAR, the National Association of Home Builders, and McGraw-Hill Financial Global Institute.

Economists at the forum said today's housing market represents just a partial recovery from the severe downturn that hit the United States about seven years ago, but they differed on how much of a role overly tight credit is playing in the slow return to a full recovery.

He also said Fannie, Freddie, and the Federal Housing Administration continue to base their approval models on credit scoring criteria that should be updated to reflect improvements in data analysis as well as changes in demographics and how people use credit today.

What's more, home prices are rising faster than incomes because inventories of homes available for sale remain low. Right now, new homes are coming onto the market at about half of historic norms, creating a supply-and-demand mismatch that keeps younger households on the sidelines.

One reason for the low level of new starts is the difficulty small builders are having obtaining construction loans. These small builders typically comprise the bulk of new home construction in the country, but they're unable to compete for financing with large builders, who have access to Wall Street financing.

Anthony Sanders, distinguished professor of finance at George Mason University, agreed that credit access needs to improve but said the fundamental problem goes beyond that: it's weak income growth among households, which is limiting demand for homes.

"It's not credit, folks," he said. "It's demand. Borrowers are poorer now, after millions went into foreclosure. It's a different economy we're facing right now."

Today, U.S. income inequality is comparable to other developed countries before taxes and transfers, but is among the worst after taxes and transfers, meaning the U.S. shifts relatively less income from higher income households to lower income households. The U.S. ranks around the 30th percentile globally, meaning 70% of countries have a more equal income distribution.- Source Wikipedia

What Does a REALTOR® Do To Earn Their Commission?

What Does a REALTOR® Do To Earn Their Commission?

REALTORS® are known for helping people buy and sell real estate, but much of what a REALTOR® actually does to earn their commission happens behind the scenes. A good REALTOR® will make your real estate transaction flow smoothly through each step of the process, leaving the impression that their job is fairly simple. The fact is - that couldn't be further from the truth. Anyone who has ever lived with a REALTOR® knows how difficult their job is. If you've never spent much one-on-one time with a REALTOR®, you may not understand how different their job is from the average everyday job. For this reason, I created a simple infographic covering a few of the day-to-day items that REALTORS® are responsible for. A day in the life of a good REALTOR® is extremely complicated.

Being a REALTOR® is Exhausting!

As you read through some of the tasks on the infographic above, it may seem overwhelming. That's because it is. Full-time REALTORS® who excel in their careers are high-energy, time-efficient professionals who know how to handle stress and responsibility well. There are definitely REALTORS® out there who cut corners and do not take care of their responsibilities as well, but they should not define our industry. The real estate industry is loaded with very impressive professionals with whom I am proud to work with.

Below I have compiled a list of common REALTOR responsibilities, including those in the infographic above. 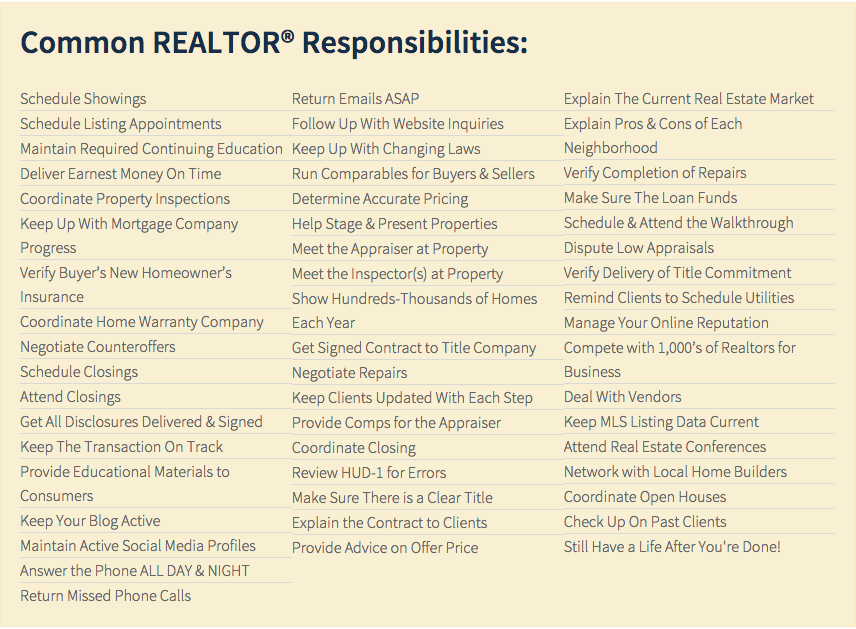 Being a REALTOR® is Expensive!

On top of the large list of responsibilities that REALTORS® carry, they also have many expenses to account for. When people see a REALTORS® commission check, they may feel like we are getting rich quick. In reality, the average REALTOR® makes around $50,000, after all expenses and taxes. Much of the money from our commission check goes to maintaining our business and licensing fees. Less than half of it usually goes into our bank account. Here is a list of some common REALTOR® fees:

Being a REALTOR® Can Drive You Crazy!

Many people try to start a career in real estate under the assumption that there is easy money to be made here. In reality, it is a brutal business with loads of competition. The paychecks are not large enough to keep people in the business, a fact that is reflected in the 20% success rate for new REALTORS® . Those who do survive usually do so because they have a passion for the business, and helping people make their real estate dreams a reality. It's a great business to be in, but it's NOT EASY!

So, the next time you work with a REALTOR®, remember that they are human just like you, and they carry a lot of burden and responsibility in their job. We work long hours for months on end for clients with no guarantee of a paycheck. When you understand these things about REALTORS® and let them know that you get it, you can be sure it will put a smile on their face. :)

Rents are rapidly rising, jumping 14 percent since 2010 -- yet many young adults are continuing to delay home ownership and rent instead.

While managing debts and saving for a down payment continue to prove big barriers to some, some housing analysts say that the main reason Millennials aren't buying is that they just don't feel any urgency to.

"Millennials are getting married later in life than previous generations, and a sense of urgency to purchase comes with stability, marriage, and growing families," Joan Kamens, a real estate sales associate with Coldwell Banker Hearthside in Newton, Pa., told CNBC.

30 percent of Millennials consider buying a home important but not a priority, according to a recent Goldman Sachs study.

Neeta Mulgaokar, a real estate sales associate with Mirador in New York, says that she often hears her clients say: "Why would I buy when it's so expensive? I could use that money for something else like travel or starting a business." Also, she notes that many Millennials may be reluctant about the home buying process. "Many Millennials have been burned or felt trapped by contracts (cell phones, cable, even student loans) and are shying away from long-term commitment," Mulgaokar notes.

So could anything get this generation moving more toward home ownership? Kamens believes they will, eventually. Once they're more established in their careers and family and when "education for children becomes a factor, they may settle with less for the convenience of quick travel time to the workplace," Kamens says.

But the longer they wait and remain renters, they may face more obstacles getting into home ownership down the road. The gap between rental costs and household income is widening to unsustainable levels across the country, according to a study released last month by the National Association of REALTORS®.

"Current renters seeking relief and looking to buy are facing the same dilemma: Home prices are rising much faster than their incomes," Lawrence Yun, NAR’s chief economist, had noted about the study. "With rents taking up a larger chunk of household incomes, it's difficult for first-time buyers – especially in high-cost areas – to save for an adequate down payment."

Just like the kitchen, contemporary designs are growing in popularity in bathroom remodels. These contemporary touches in the bathroom equate to clean and open designs, with floating vanities and freestanding tubs.

Last week, at Styled Staged & Sold, we highlighted the top 10 trends for the kitchen this year. This week, we focus on the National Kitchen & Bath Association’s latest trend report on what’s driving bathroom design in 2015.

Here are the top 10 overall bathroom design trends NKBA designers expect to be hot this year:

Most popular colors: White and gray are the dominant colors for bathrooms. Half of designers expect to see gray growing in 2015, and several designers also mentioned the growing popularity of purple, lavender, and lilac tones gaining steam in bathroom designs. For fixtures, white continues its dominance.

Out of style: Jetted tubs, whether whirlpool or air, are decreasing in popularity, according to NKBA’s report. “People are moving away from jetted tubs to more classic soaking tubs,” says Bill Donohoe with Donohoe Design Works in the Los Angeles area. Also, beige fixture colors are increasingly dropping in popularity.