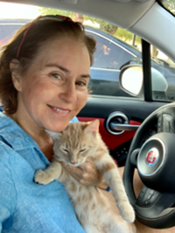 I am a California native who arrived in the Coachella Valley desert more than 20 years ago via Silicon Valley, continuing my high-tech career in Public Relations until switching to the tumultuous world of real estate 15 years ago. Because of my long history with the desert—visiting for years before moving here permanently, I've witnessed the transfomation of Palm Springs and its sister cities into an international destination for art and nature.

Modernism Week—with its homage to Palm Springs' impressive mid-century architectural roots—now boasts two discrete events that attract international attention. The Coachella and Stagecoach music festivals held on the Polo Grounds in Indio have put the east end of the desert on the map. Polo events, the West's largest dog show and the Southwest Arts Festival are also held on these verdant fields. PNB Paribas held at the superb Indian Wells Tennis Garden in March is considered the 5th Grand Slam and the players' favorite event of the year. Desert X—a biennial exhibition of site-specific outdoor art scattered throughout the valley—has already created justifiable international buzz.

As a golfer, I've played many of the Valley's 121 courses and am familiar with the dizzying array of wonderful country clubs. Let me know your desired desert lifestyle and I will match you up with the perfect community.

I've found homes for clients throughout the Valley: from Palm Springs to my hometown of La Quinta—which offers the widest array of luxury communities.

My creative marketing efforts toward selling properties employ both traditional and digital stragegies. Put my enthusiasm and expertise to work on your behalf!

More stats for September!
• Home prices nationwide soared 18.1% in August.  This marks a 45-year high for residential real estate.
• Here in the Coachella Valley, the median price of a detached home (SFR) reached $585,000—a 12-month increase of 14.7%.
• Attached home (condo) prices rose 23% to $375,000. Sales in this category have been filling in the void created by a dearth of SFR listings.
• Every single Valley city shows a year-over-year change in detached homes of at least 20%. Indian Wells leads the list at 42.8%, Indio at 32.2%, and Palm Springs at 29.7%.
• As of October 1, just 883 units were listed for sale on the MLS, compared to 1,959 last year.
• Palm Springs is selling detached homes at the highest premium over list price at 2.4%.
• Because of the paucity of sales and a ridiculously low time-on-market ratio, there is little worry from the experts about imminent price declines or pullbacks after last year's surge.
So, if you're intrigued with selling or buying, the market still beckons both ends. Let me know how I can help in the process.

Still blazing hot outside even in September, the AC caressed Kobi, the car-loving canine, in his front-seat perch with spillover for the spouse in the back. Other drivers notice and smile.

Shoe magnet Florsheim probably wore sandals during his desert days while Jim and Tammy Faye Bakker hid out on the estate as their televangelist empire crumbled. Jessica Chastain recently complained that the oppressive eye makeup she endured to channel the always tearful Tammy caused irreparable damage.

A neighbor often regaled me with her Tammy sightings at Ross discount store during her final years in the valley.

My sardonic pose under her nether limbs in the dragging heat seems a perfect coda to my ambitious, aborted movie-star tour. Cary Grant and Busby Berkeley will have to wait. I’ll check out the entire route later and get back to you.