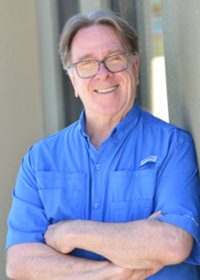 We residents of Sun City Festival have endured this before and yet again we will be subjected to the very slow stampede of moving vehicles in and out of town. But, in the end of what seems to be a long slog of a few miles, any of the expected traffic trouble will be well worth it. 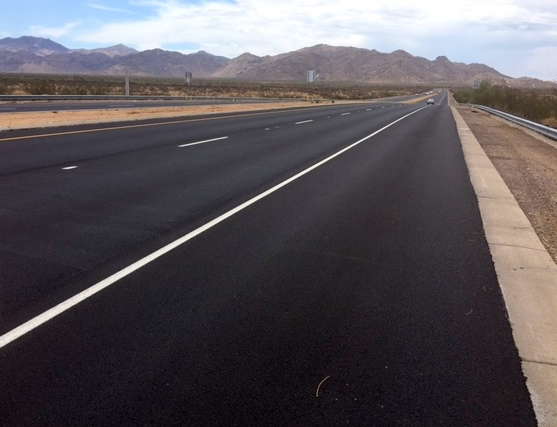 Sun Valley Parkway is a stretch of 4-lane roadway coming out of the City of Surprise to Sun City Festival. It’s approximately 11 miles from the Festival entrance to the outskirts of Surprise. Nice drive with Saguaro Cactus and the White Tank Mountains your view. Speed limit is 55 although most drive 60 to 70 miles per hour. In 3 years I’ve never seen a speeder stopped. That speed is going to be reduced for the next 3 months as Maricopa County road crews improve our drive.

Last spring they completed the first leg of the resurfacing resulting in traffic being pinched from 2 lanes in each direction to 1. Sometimes both lanes were closed forcing traffic to the wide shoulders. Speed limits were reduced to 35 and at times it was

hard to reach that.

In the end we received a much smoother, quieter road surface. The few months of traffic trouble were worth it. Leaving Sun City Festival heading east to Surprise we find the “old” road surface. Even that surface is not at all bad it just results in some road noise which the new surface eliminates. We reach that new surface about 4 miles in. The change from old to new is quite noticeable. 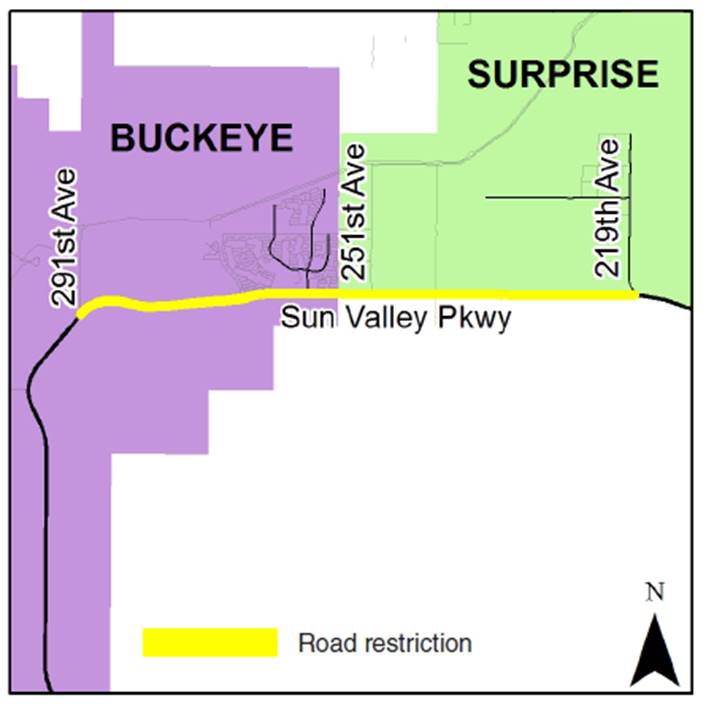 The new road resurfacing is just getting under way and will continue through June. So slow down, enjoy the scenery and just. Know that soon you’ll be enjoying the new, smoother, quieter drive between Sun City Festival and the City of Surprise.

It’s seemingly fast and furious. For months residents of Festival wondered what the next phase of development might look like. That picture is now developing.

A few weeks ago Pulte moved its sales force from its original location just off Desert Vista Boulevard to an area in the newly developing area south of Sun Valley Parkway and closer to the White Tank Mountains. Just over 100 new lots were open. Of those almost half are already sold. But for current residents not wishing to make a move there’s some exciting news.

Festival’s second recreation center is now under construction. We have some artist renderings of some of its features. There will be an indoor walking track elevated to a second floor. We have a gorgeous pool at the current Sage Rec Center and there will be another outdoor pool. We are also

gaining another work-out facility, more meeting rooms and a performance ball room. The Saguaro Recreation Center is scheduled to open in early to mid 2020. This is not the end.

Work crews have already begun work converting the now retired sales center into meeting rooms which is an expansion of the Sage Center complex. Also yet to come is a third recreation center.

As Festival continues to grow we will see the addition of thousands of homes. We currently have approximately 2800 homes in our community. Plans call for another 4,400 bringing us to a total of 7,200 homes.

While all that new construction is moving forward there are also residents choosing change. Some are wanting newer homes while others are making a move to leave (most of the departing residents do so for family reasons). We always have very nice homes for sale. That’s where I come in.

There are many realtors from which to choose but I am Festival’s resident real estate agent. I live here, I work here and only here. If having a local agent is of value to you then we need to talk. If for whatever reason you decide to sell your Festival home let me bring a team of experts to help you accomplish your goals. If you are not yet a resident I want to be the realtor I didn’t have when we chose to move here. I know the community, the home models, the neighborhoods, the walking trails, the rec centers and above all, I know how happy most of our residents are to claim this community home.

There may be some confusion thanks to the selling efforts of Pulte Homes. For a dozen years visitors and residents 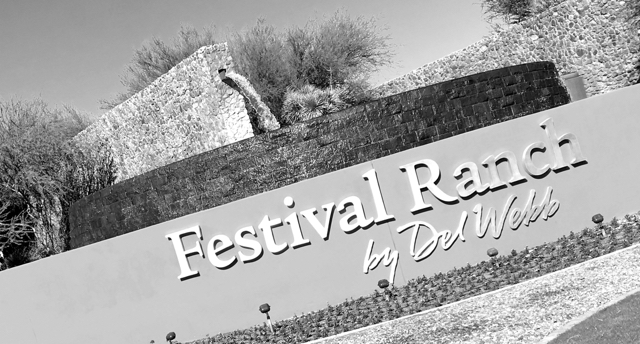 have entered Sun City Festival off Sun Valley Parkway at the entrance of Festival Ranch. The ranch is made of two parts; to the left is the age restricted Sun City Festival and to the right is a non-age restricted Festival Foothills. The design is simple. Have a place for retiring seniors and right next door a family neighborhood for children and grand children. About a month ago things changed.

As you drive toward Festival from the east or west on Sun Valley Parkway you approach two entrances. On the north is our familiar entrance to Festival Ranch as described above but to the south is an entrance only to Sun City Festival. Huh?

The age-restricted community is expanding. It’s a well planned expansion from its current size of about 2800 homes to it’s completed size of 7200. The next phase of the expansion is taking place on the south side of the parkway next to the White Tank Mountains. A new sales center and 14 models opened just a few weeks ago and apparently wherever the sales center is so too, according to Pulte Homes, is Sun City Festival. Never mind the reality that most of Festival exists on the other side.

This misdirection is made clear by the U-turn signs posted 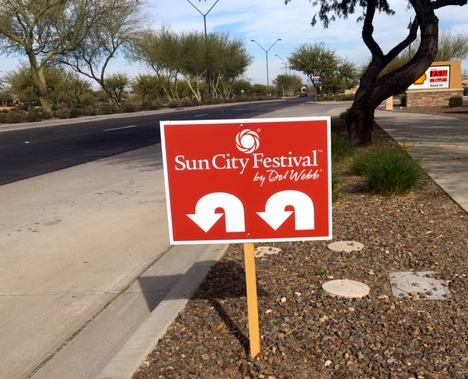 along the main entrance to Sun City Festival and Festival Foothills. Apparently the good people at Pulte want visitors to believe Sun City Festival is only the newly developing side where they are selling new construction homes. Do not be confused. Most of Sun City Festival including the Sage Recreation Center, Copper Canyon Golf Club, the pickle ball and tennis courts, the softball field and all the arts and crafts are still located north of Sun Valley Parkway  entrance labeled as Festival Ranch. The only thing available on the new south side is the Pulte sales force, the model homes and acres of undeveloped lots.

What's My Festival Home Worth

Home buyers may shop with their hearts but they buy with their wallets.  Pricing maybe the single most important element to have a successful home sale. After spending many hours studying the local area market, comparing it with the national market and reviewing recent sales data, I have come to understand that pricing a home is more of an art form than a science.

Seattle based Zillow uses computer  algorithms (science) as they “Zestimate” the value of over 100 million homes nationwide.  Zillow’s chief economist confesses that predicting with 100 percent certainty what a home will sell for in the open market is nearly impossible for computers and humans alike. This is why they have fine print that explains their rate of error. It is an error rate that can cost a home seller thousands of dollars. Zillow does not give a full picture of home prices in Festival. However, there is a method I use which can help home sellers and buyers.  It is the CMA or Comparative Market Analysis.

market is saying. The CMA is a side-by-side comparison report of homes currently for sale and homes that have SOLD in the same neighborhood. I will typically include new listings (for sale), pending sales (under contract), closed sales (solds) and expired listings (failed to sell). When it comes to pricing your home, there are lots of opinions but only one set of facts. Those facts are clearly spelled out in my CMA.

Some home sellers rely on less than accurate methods of pricing. There are two common mistakes made by many sellers in setting a sale price:

A buyer doesn’t care how much you’ve paid or invested in the house. Smart buyers (usually represented by market-wise agents) will know what other homes in the area are selling for and they will use that information to determine the value of your home. Trust me, by the time a buyer looks at your home he/she has probably seen the other six homes similar to yours that are currently for sale. These smart buyers will be comparing your price and home improvements to all the others.

Next on our list of seller mistakes is neighborhood gossip. What others claim they get for the sale of their home is not a reliable form of information. Home sellers will usually not disclose if they’ve had to discount a home to make the sale. It’s an admission of failure.

The point is, when it comes to pricing your home to sell, use only facts.  This will give you a more accurate picture of the real estate market. A more accurate picture will enhance your chances of a successful sale in the shortest amount of time. Ask for your free copy pf my book The Ultimate Guide to Selling Your Home which is designed to help you sell for more money in less time.

I may have found the reason of reasons to make a move to Sun City Festival by Del Webb and it’s not what you may think.  Festival is the newest of a series of 55+ communities on the Northwest side of Phoenix.  It benefits from years of builder experience in creating great communities for active adults.

First came the grandaddy of them all, Sun City.  Developer Del Webb realized the coming baby boomer generation may be ready to retire but they wanted more than shuffle board. He opened Sun City on January 1, 1960.  There were 5 models from which to choose. Webb had hoped to draw up to 10,000 people that weekend.  He didn’t, instead one hundred thousand people lined up to see the homes.  Today Sun City has just under 30,000 homes.

company moved to the west and opened Sun City Grand. While there were only 5 floorpans to launch the original Sun City by the time the builder got to Grand they were offering 50 plans.  It was fully developed with just under 10,000 homes by 2006. Then came Sun City Festival.

While Festival is the newest it carries with it over 55 years  of active adult community experience. We have the most modern floorpans and the latest in efficient build technology. There are over 20 floor plans with new plans unveiled every couple of years.  The amenities such as swimming, golf, pickle ball, tennis, running and walking trails, bicycle lanes on all the streets, a fully furnished gym, Arizona State University’s Life Long Learning classes and the list continues.  All of this is great but we came to realize the real reason to choose a community is as Del Webb said years ago, it’s not the buildings that make a community, it’s the people.  We certainly found that out in our own neighborhood.

My wife was stricken with pneumonia and was hospitalized for 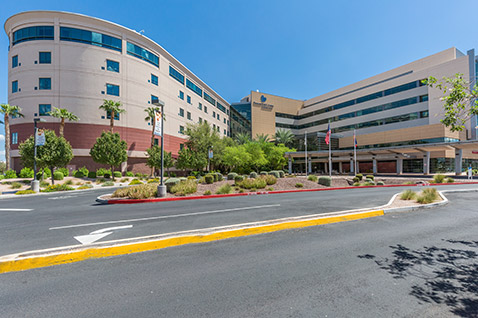 several days. On her release we discovered what a truly great community this is. Neighbors started bringing complete meals to our house at dinner time. It had been organized through the neighborhood grapevine and one by one they came delivering food while my wife recuperated.

These columns may from time to time brag about the gorgeous setting, the wonderfully modern homes, amenities galore but just know behind it all is what really counts, the people.  I hope you’ll come visit, stay awhile, let me show you some houses while your here.  Want to build a new house?  Call me and I’ll help you arrange a meeting with new home sales. As we used to say in the farm country where I grew up “we’ll leave a light on for ya”.